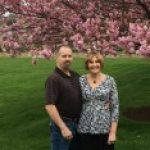 My name is Leslie Peters and my journey began in 1998 when my mother in law, Mary, was diagnosed with Parkinson’s disease. At that time I had no idea what PD was. My husband’s parents lived in Allentown, PA and we lived in Thornton, CO. The first time we saw Mary, after her diagnosis, we didn’t see much difference, so we felt encouraged. Over the next few years we saw Mary approximately twice a year and she deteriorated a little each time. In 2003 my father in law passed away and by that time Mary’s disease had progressed significantly. She continued to live in her long time home but we visited her and she visited us as much as possible. During a visit in 2005 we decided that Mary should move to Colorado, to be with us. We did what we thought was the right thing, at the time, because my husband, Steve’s, brother and sister were not able to care for her. We couldn’t stand the thought of Mary being in a nursing home 1,500 miles away. In retrospect bringing her here may not have been the best decision. Mary came to live with us in 2006. At that time we had a daughter in her senior year of high school and a son in elementary school. Our lives were extremely hectic. Besides having two active children and both my husband and I working full time, Steve was also working on completing his MBA. Mary really struggled with her disease. Along with the tremors she had extreme freezing episodes. She had trouble sleeping and painful restless leg syndrome. She also began to suffer with incontinence. Her neurologist increased her medications but they had terrible side effects, especially the dyskinesia.

It was 2007 when I first noticed Steve’s tremor and that he no longer swung his right arm. Around the same time, Mary started falling and having a difficult time getting around our home. Going up and down the stairs was especially challenging. Mary was very independent and would not wait for us to get home if she needed something upstairs. One day Steve had a hard time reaching her, by phone, so he rushed home and found her laying face down on our family room floor, unable to move at all. Shortly after that we decided that Mary needed more care than we could provide. We moved Mary into an assisted living facility, and that is when our lives changed forever. Between my husband’s extremely stressful job, him staying up all night finishing his MBA, our daughter leaving home for college and his mom’s disease progression, Steve’s symptoms seemed to get worse everyday. He refused to acknowledge that there was a problem and I was in such a state of denial I allowed him to continue that way for quite a while. We continued with our day to day activities and tried to also get over to Mary’s to visit her. Seeing her struggle was so hard for so many reasons. We felt guilty that she was in a strange place and that we didn’t have as much time to spend with her as we should. Seeing her also scared me to death, because I knew Steve definitely had something seriously wrong. Mary passed away in 2009 and we took her back to Pennsylvania to be buried with Steve’s dad. By that time Steve had received his MBA and life should have calmed down. He continued to have problems with tremors and soon coworkers started questioning him about them. He had a very high pressure, highly visible job and hiding his tremor became impossible.

In 2010 Steve was mistakenly diagnosed with stress induced essential tremor. We were both so relieved that it wasn’t PD that we put our heads down and continued to be hardworking, productive members of society. Our son was now a junior in high school, and Steve’s job kept him very busy, traveling internationally. Time seemed to be flying by, and by the end of 2012 Steve began having a resting tremor. Not too long after that we received the devastating diagnosis. Due to apathy and cognitive changes Steve wasn’t able to continue working. For Steve, going from an executive position to having to apply for Social Security Disability was a very humbling experience. The next two years were extremely difficult – we lost 3/4 of our income and our health benefits. We isolated ourselves from everyone and if it hadn’t been for my parents help could have lost everything. We have a strong faith but I really struggled trying to figure out why our lives had taken this terrible turn.

To make a very long story a little shorter, I finally came to the realization that if I didn’t channel my energy into something positive, I was not going to survive. I began doing advocacy work for the Parkinson’s Action Network and was invited to go to Washington D.C. to tell our story to my State’s representatives. During that visit to D.C. I was able to meet Davis Phinney and some other amazing people that have truly changed my life. Steve and I downsized and moved into our retirement home a little sooner then we had expected to, but that is ok. Our daughter, Amanda, recently married a wonderful young man. Our son, Noah, graduated from Colorado Media School and has a good job. He has also started doing his own advocacy work, for PD, and we could not be prouder. Steve has had deep brain stimulation and it has helped, tremendously, with his tremors. In a few months we will celebrate our 30th anniversary. I want everyone know that there is life after a PD diagnosis. We plan to live it to the fullest!