What Sleep Issues Do You Experience? Results From Our Survey

Sleep plays an important role in overall health and well-being. Unfortunately, it is common for people with Parkinson’s disease (PD) to experience a variety of sleep problems. These issues can have a serious physical, mental, and emotional impact.

As part of our 4th Annual Parkinson’s Disease In America survey, we asked people with PD to tell us about their sleep troubles.

More than 1,400 people completed the survey and shared the sleep challenges they face while managing their condition. Overall, about half of respondents said sleep issues disrupt their quality of life.

What sleep issues do people with Parkinson’s face?

Research shows that sleep disorders are a major issue for people living with PD, affecting up to 75 percent of those with the condition.1,2 In our survey, 47 percent of the respondents reported trouble sleeping and/or insomnia as a symptom that they have experienced in the last month. 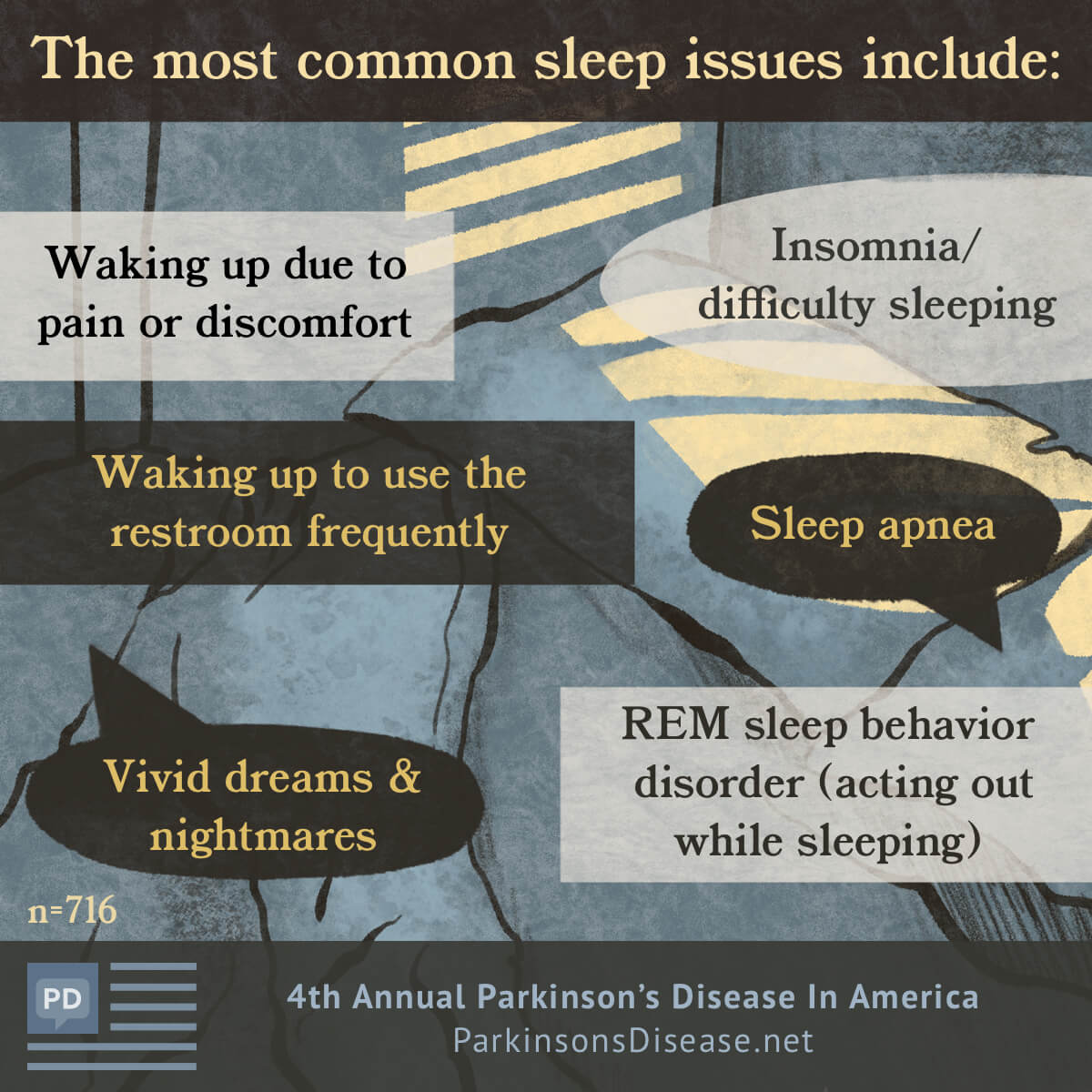 Experts have found that many people with PD also experience:1-3

Numerous survey respondents said they have a combination of sleep issues, leading to frustration about rest. Here is a look at some of the sleep challenges they frequently experience.

Some survey respondents said they have a hard time falling asleep, while others have trouble staying asleep. Another group of respondents has trouble with both sleep issues. Research shows that more than 35 percent of people living with PD have insomnia.2 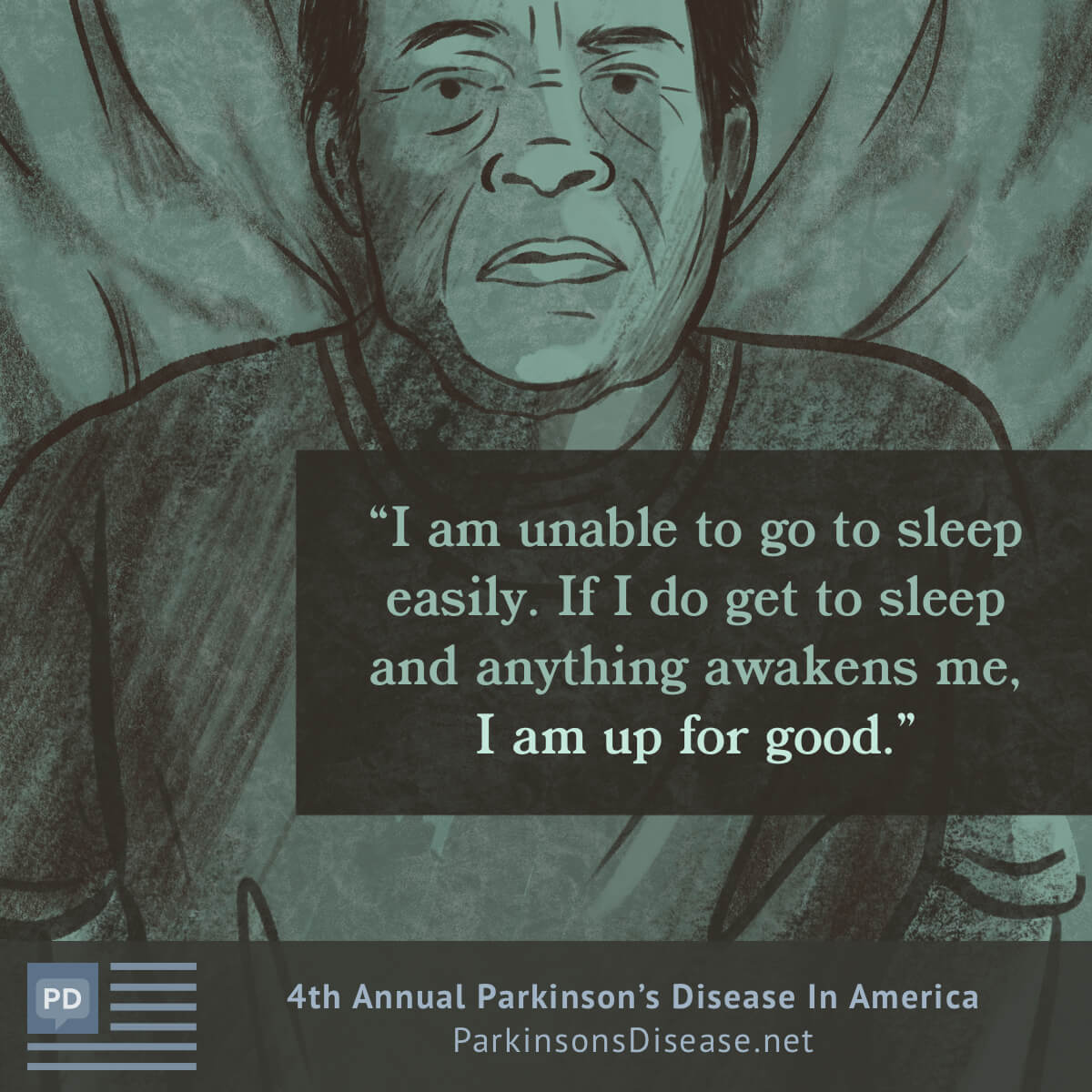 “I have no problem falling asleep, but after 3 hours I am fully awake for another 4 hours before I go back to bed. I have never had sleep issues of any kind in the past.”

“I have a hard time getting to sleep and staying asleep. I am tired but cannot sleep. I fall asleep in the middle of doing other things.”

Research shows that vivid dreams, nightmares, and night terrors are common in people living with PD. One study found that people with Parkinson’s have dreams involving different subject matter than those without PD. Violence, misfortune, and animals are common in the dreams of people with PD. 2 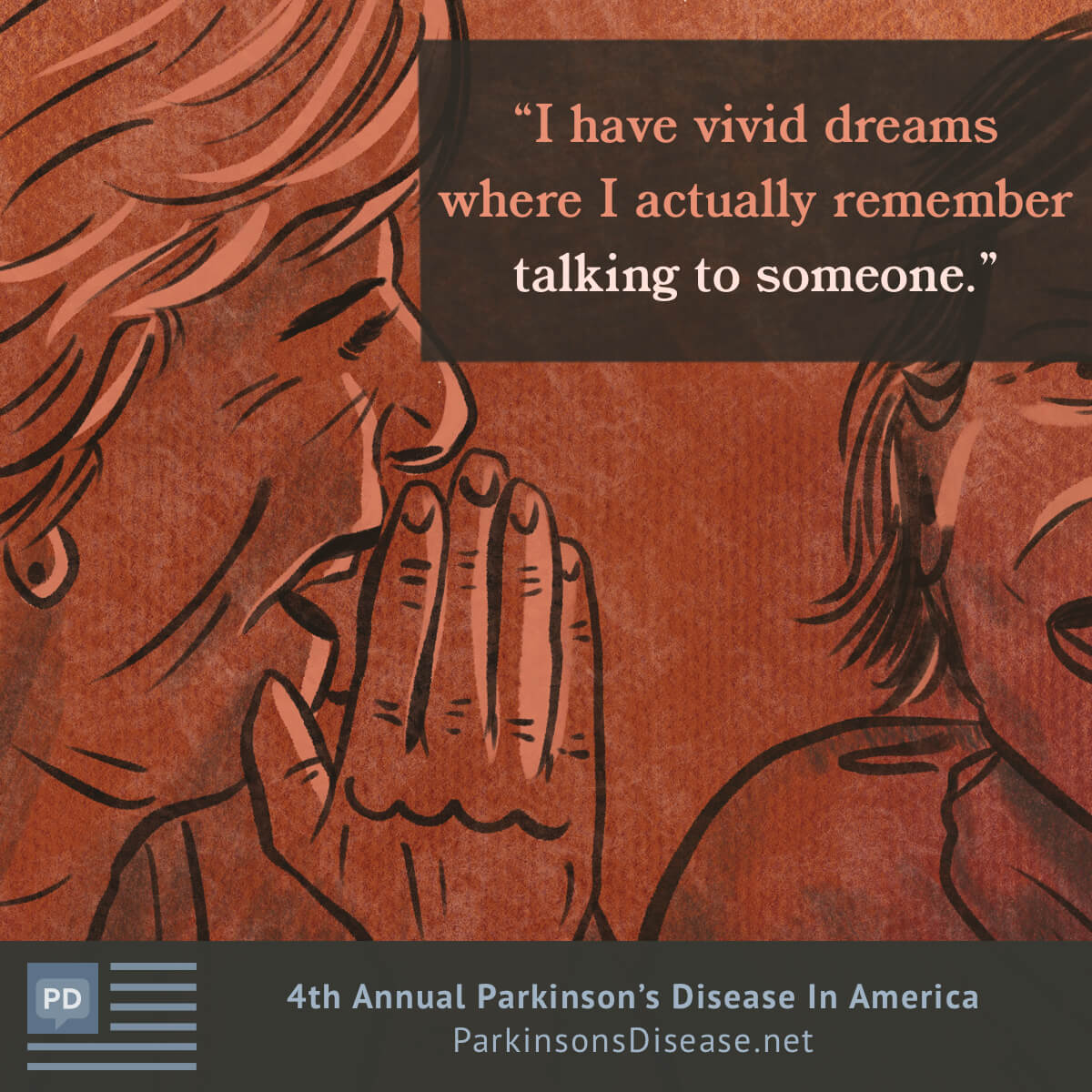 “[I have] vivid dreams that frequently involve fighting, running, hiding. [I have] dreams of hunting and being hunted by wild animals, most frequently bears.”

Acting out, kicking, punching, and screaming during sleep

Many survey respondents shared that their sleep can be chaotic. They experience thrashing, yelling, screaming, and hitting. During sleep, community members say they kick, hold conversations, and have unintentionally hurt their sleeping partner.

Researchers estimate that between 50 and 60 percent of people living with PD have rapid eye movement sleep behavior disorder (RBD). RBD occurs during the stage of sleep when we dream. People with RBD do not have normal muscle relaxation during REM sleep, so acting out dreams is not unusual.

Someone with RBD can have abnormal behaviors, emotions, perceptions, movements, and dreams. This can happen while a person is asleep, falling asleep, or waking up.2-4 RBD can develop after or along with Parkinson’s, and oftentimes it develops 5 or more years before a PD diagnosis.1,4

The experiences of survey respondents include: 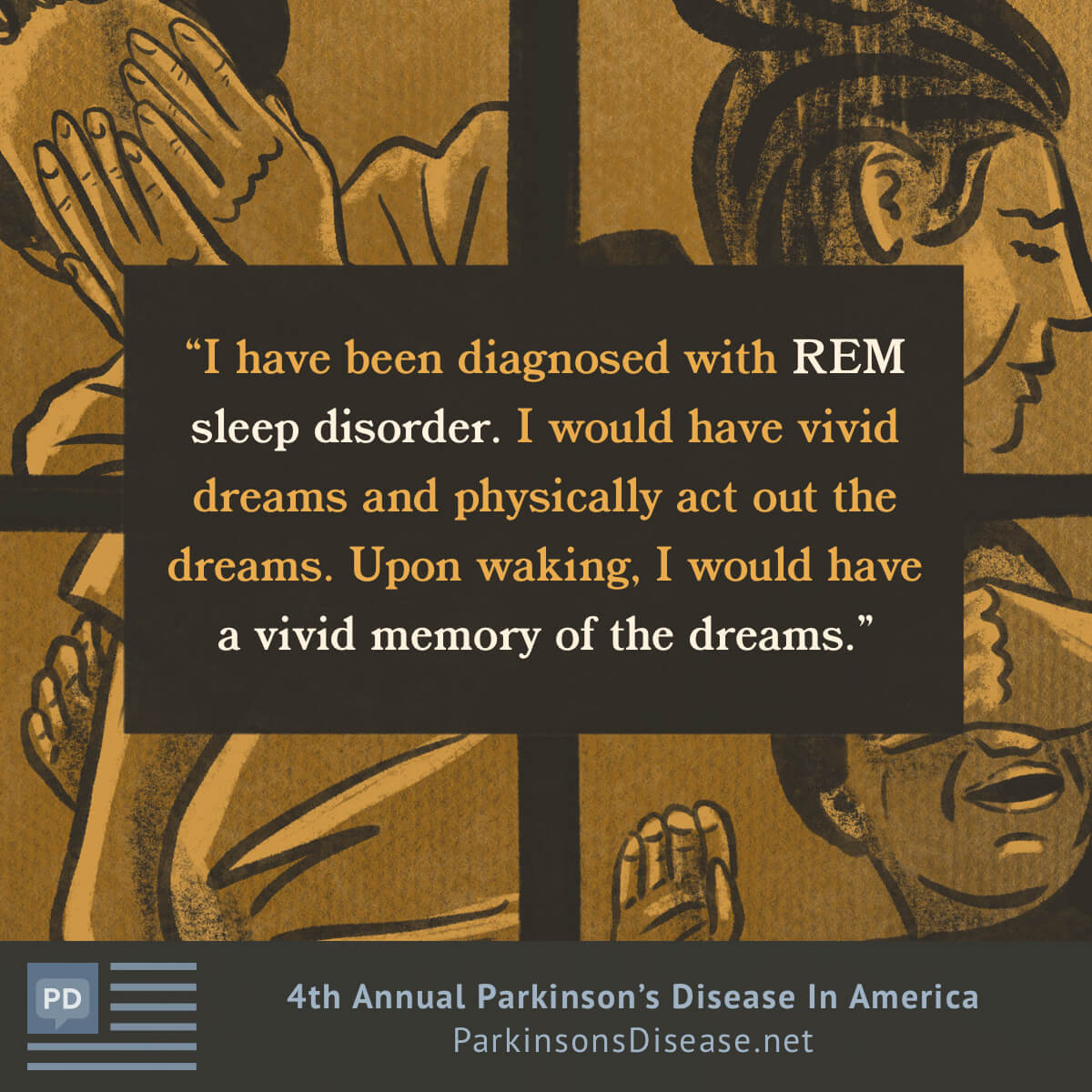 “I shout out nonsense and wake my husband. Sometimes when I do this I am crying in my sleep. It especially happens if I have a nightmare. It happens at least once a month.”

“[I] sleep very well but my wife says I move around quite a bit, sometimes even lashing out.”

“I have REM sleep behavior disorder. I have violent dreams in which I am terrified. Sometimes I have to fight back against an assailant. I kick, holler, scream, and pummel these assailants until my husband wakes me up and tries to calm me. I have awakened beating my husband or kicking him.”

Research shows that up to 40 percent of people living with Parkinson’s also have sleep apnea. Common sleep apnea symptoms include loud snoring, restless sleep, and breathing pauses at night.1,4 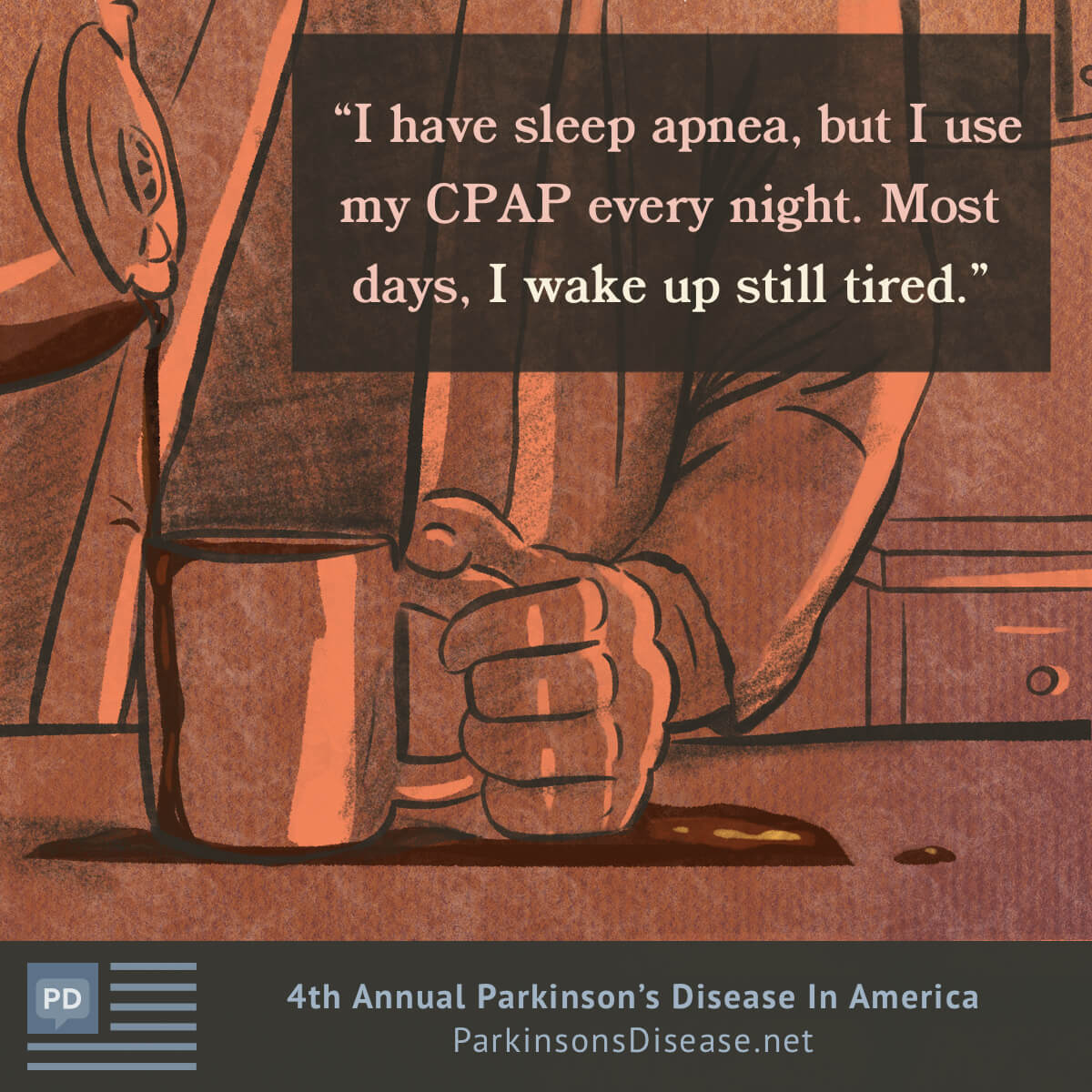 Waking up due to pain or discomfort

Difficulty sleeping due to pain or discomfort was also noted by many survey respondents, with tossing and turning as a regular occurrence. 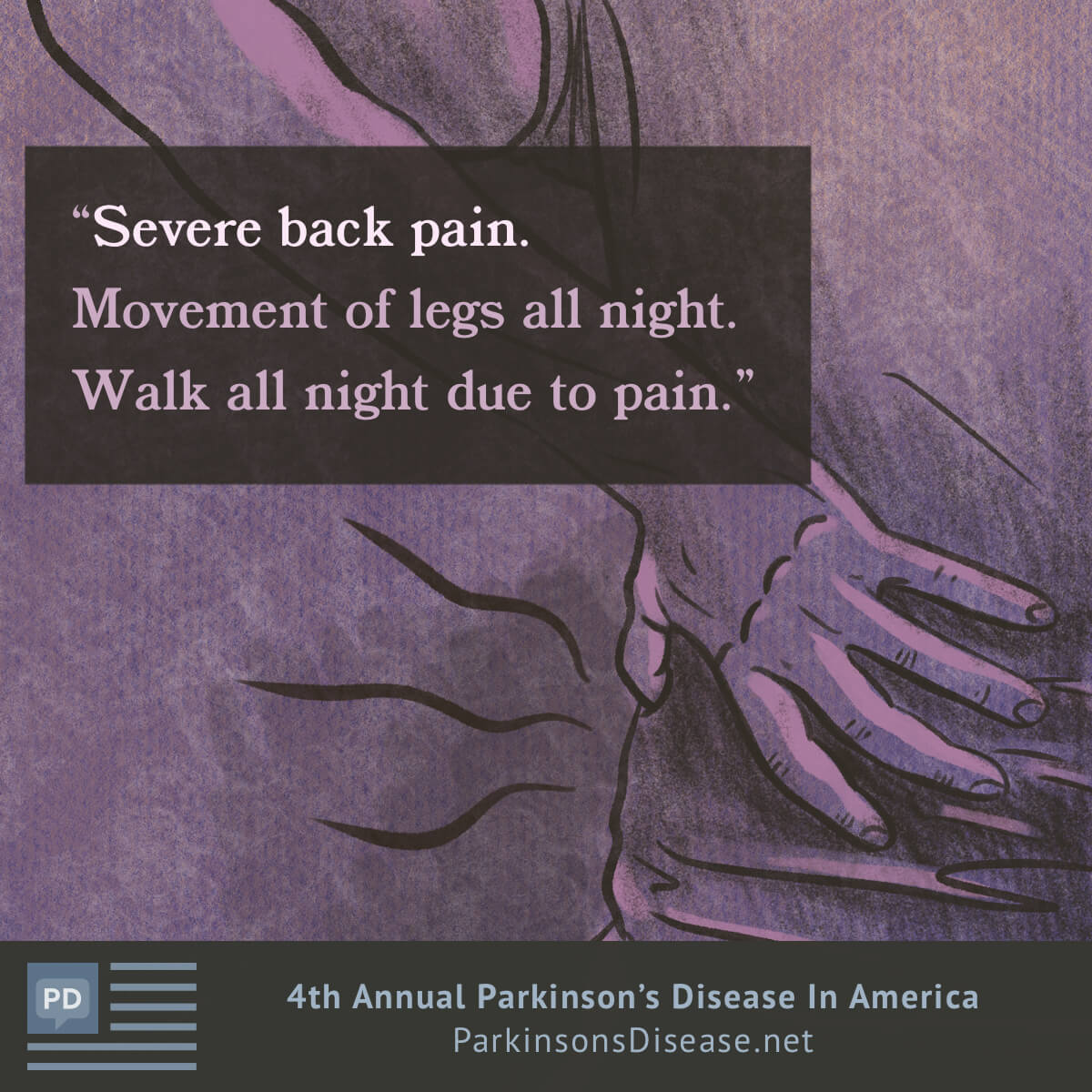 Bladder issues and waking up to use the restroom

Bladder issues are common in people with PD, and some survey respondents shared that they often wake up with the urge to urinate. Studies show that anywhere from 30 to 40 percent of people with PD have urinary problems.5 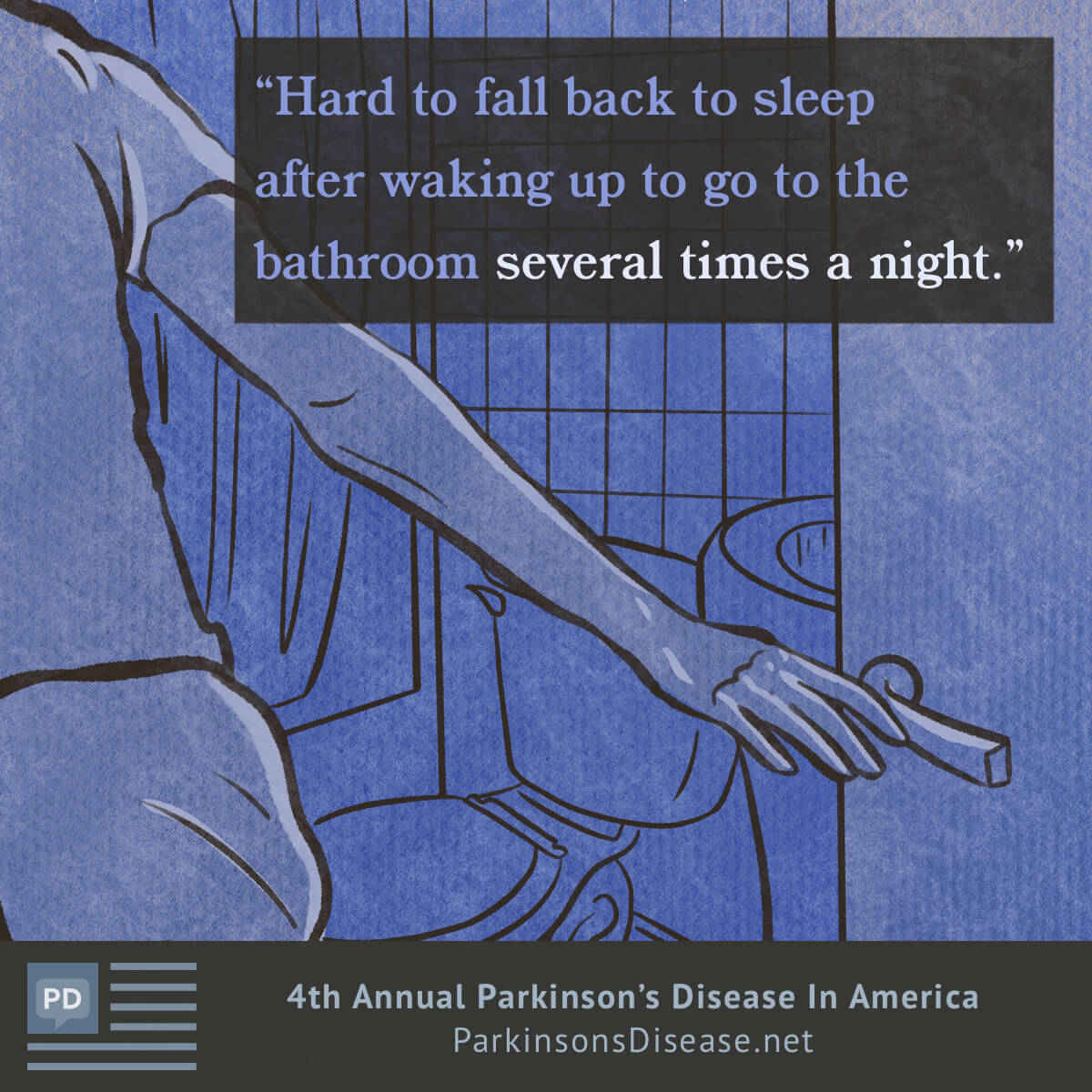 The 4th Annual Parkinson’s Disease In America survey was conducted online from May to August 2020. 1,472 people completed the survey.

Have you ever tried the Mediterranean Diet?