Fishing for Thoughts in the Ocean of Life

As a newer Parkie, I often find people commenting on my optimism with a response that they too felt the days of word fishing, tremoring, adapting + acknowledgement, and slowing down were easier than the times of freezing, deep brain stimulation (DBS), and loss of independence.

When I express it that way, it sounds “weird.” When I compare apples to oranges, I can see both sides have a unique set of issues. These problems shouldn’t be ranked against one another. It would be like saying a kid’s problems are nothing compared to an adult. Everything is based in how a person feels the emotions of it. The key is to find coping strategies now instead of hoping for them later.

In seven years of symptoms and a year and a half of diagnosis, I have confronted some serious issues of what’s coming. Yes, I know that anything I do can and will be slowed down and possibly removed in this process of neurodegeneration. Like others, I see my current symptoms against the backdrop of other people’s conditions, and rather than thinking “that’s not me,” I see a sense of “that will be me.” The only question is when and how far into that journey will I go.

I could let this scare me senseless, or I could just live now. I could deny it, or I can work to accepting it. For this, I repeat mantras of optimism to you and me because I like that state of being more than waiting to crash into oblivion. If we say it and think it, we become it.

Nevertheless, I am aware of what comes next, and that means that I’m going to begin my journey into fishing.

Fishing has nothing to do with going out to sea for marlins or to catch whatever fish are biting. No, this is about catching words. As a teacher, I taught others how to write. As a writer, my job is conveying ideas. Whether this is with Parkinson’s assistance or fictionalizing supernatural experiences, I need my words flowing. To do this, I have to have a complete grasp of the language, and it needs to flow like Jay-Z. The pause in movement from subject to predicate can’t be noticeable.

If I’m having an audible problem getting from point A to B, that’s an issue. It’s a really big problem if I can’t figure out what I’m trying to say. While I eliminated former medications that caused this problem, I still fear the mysterious pauses. It’s there when I go looking for the P word that means an excessively large amount, so I can use the right word instead of the definition. Can my mind find plethora, or will it call for “silence?”

When I first taught English language learners, I learned about word approximation. A student might know what vegetation is. However, he/she isn’t aware of the phrase plant life, so the word in use becomes “plantation.” Sometimes, my word fishing makes this error.

While typing, I will get “face” for “fact” or come up with a word that is close in structure, but it doesn’t have the same meaning (absent vs. abstain).

In a similar way, I might read your sentence and not pick up a word in it. For instance, this got me in trouble with my mom for not picking up things for Easter. Another time, I read my friend’s message that “my wife and I often need a day to recuperate from a vacation.” I didn’t see OFTEN, so the phrase had a brand new meaning when I asked him where he went.

A map of the world

As for word fishing, I generally find myself in control of most of my conversation’s meaning, but it becomes punctuated with silence. The bridge isn’t out, but my “map of the world,” as Laurence Gonzales coined it, is faulty.

If our bridge is out, we need to drive up the road and find the next one. Here, I think of the unplowed Tioga Road in Yosemite. That blockage causes people to drive for hours to find the same place on the other side of the mountain. If I mess up badly enough, I could “shuffle off this mortal coil.”

The things Parkies do while playing with a “bad GPS system” range from performing jobs, driving cars, having relationships, and talking about the weather. Understanding how mind freeze is coming to wreck our memory is the first big blow of Parkinson’s. For instance, a fellow Parkie I spoke to was further along. Hence, she didn’t talk much because she was self-conscious of her bridgework.

Admitting fear is the first step to dealing with it

I found my place in life with things that involved using my brain. Now I’m coming to face this wendigo head on. I need to prepare to fight hard to the core monsters. 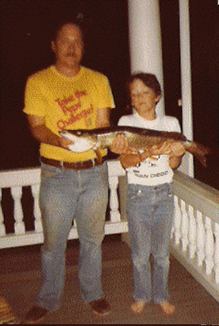 So if I’m filled with optimism now, it’s not that I don’t know about DBS, freezing, falls, aspiration pneumonia, losing independence, my family’s tears, and financial woes. It’s just that I prefer to live my days as good as I possibly can.

In life, it’s amazing what you can accept losing if it means we can keep other things. For some of us, it means something like redefining what an intimate relationship is.

For this reason, I have to say that until I come to that river with Chris McCandless, I’m going to go for a swim with Lieutenant Dan.

You’re welcome to join me.