I wish I could play my guitar better

My name is Gary Michael Mazzola. I’m a Singer/songwriter and Actor/Director and I live in Tehachapi, CA.

I was first diagnosed with Parkinson’s Disease in 2012, but I probably had it for a little while before that. I don’t know where it came from because, as far as I know, I don’t have any relatives that have been diagnosed with it.

There is a current lawsuit linking Parkinson’s disease and exposure to paraquat, which is a toxic chemical that is widely used as an herbicide (plant killer), primarily for weed and grass control. For about twenty years, 5 days or more a week, I’d drive from Tehachapi to Bakersfield for work. My car doesn’t have air conditioning, so my windows would be open during my commute to work. The crop dusters used to dust crops over the freeway on my route. The odor was so strong that I could smell the pesticides in my car whether the windows were open or closed. There is no way of knowing for sure whether that is what caused me to get the disease, though.

Music and the arts with Parkinson's

Through the years since 2012, I’ve tried to lead a normal life, even though I’ve had to cut back on things. I can’t drive more than around town because long distances make me tired, due to the Parkinson’s medicines I need to take to function.

Lately, PD has really been hindering me playing my guitar. I can’t strum as fast or as accurately as I once did and it’s very frustrating. I used to perform shows for the community and nearby towns, but the last show I gave was two years ago on my birthday.

When I first got this disease, I thought they were really close to a cure, but I’ve been hearing that since I was diagnosed and they don’t seem any closer to that cure that I’m aware of.

Both my kids live out of the area now. I live alone and wish that I had someone to grow older with. I used to be laid back and easy to be with. I still am that laid back guy, but now I’m “high maintenance” because of this disease. I’m starting to get used to being alone, but it would be nice to have a girlfriend. I don’t see it happening, though.

I played Norman in the play, On Golden Pond this year (2022) at our local Community Theater. I’d been directing, but I’d not been acting in years due to PD. I was asked to be in it, and I found out about a new drug that could help me. I’ve been taking it ever since. It’s an injection type medicine and it makes me good for a couple hours and then I need to give myself another injection. It was hard, but the injections helped me get through it. I found ways to incorporate my PD into the character. Luckily, that didn’t happen often. One time during a scene, my foot did not want to move forward, so I added a line something like, “move foot” and that seemed to help my mind move my foot to get myself moving and worked with the character.

I still have trouble walking, but I use a cane that helps me. Sometimes it gets so bad that I can’t even get up out of my chair or I feel like I’m going to fall out of the chair. It takes me a long time to get out of bed, too. I have some ropes that I put up so I can help hoist myself up to get out of bed.

The best time is when I take a pill at six in the morning. That helps me to be able to move around to get out of bed. I worry though that, God forbid there’s a fire. I don’t think I’d be able to get out of the house fast enough. It’s kind of scary. When I don’t get enough sleep, the symptoms are worse. When there are symptoms, I don’t sleep well. It’s a vicious circle that makes my whole day harder.

Getting dressed is a chore. It takes me ten minutes to put my pants on. Sometimes when I’m walking, I freeze up and can’t move. My balance is all shot, and I have to be really careful, or I’ll fall. The new drug I’m taking helps a little, but I still freeze sometimes. I get up in the middle of the night and go to the bathroom and I don’t get much sleep because I can’t get comfortable. It’s very difficult to get a good night’s sleep. This disease is very challenging.

The future is not written yet

I don’t know how much longer I’ll be able to, but I’m going to continue to write and record songs and I’ll direct plays and short films because it’s who I am.

The future is not written yet and I’m still hoping for a cure. I’m going to keep doing what I love and hope for the best. I know everyone has something to deal with. I just wish I could play my guitar a little bit better.

I try to keep myself busy because if I don’t, I start to think about my situation. That gets very depressing I don’t want to be swallowed down by the rabbit hole of depression.

I get very emotional very easily. The movie Field of Dreams always makes me cry now.

My father left home when I was seven, so I have this sense of abandonment I’ve been dealing with all my life. I think the Parkinson’s makes it a lot easier for me to cry, which may be a good thing rather than holding it in. 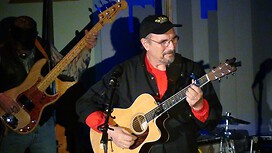 How I Am Managing Micrographia

I Have Choices: Living My Life Fully With Parkinson's Disease

10 comments
This article represents the opinions, thoughts, and experiences of the author; none of this content has been paid for by any advertiser. The ParkinsonsDisease.net team does not recommend or endorse any products or treatments discussed herein. Learn more about how we maintain editorial integrity here.

Do you or a loved one experience micrographia (small handwriting)?