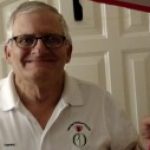 My name is Tommy and I first learned of PD watching Muhammed Ali light the Olympic Torch at the Atlanta Olympics.

I am a husband, father to six children, grandfather to five. Unfortunately 4 of my 5 grandchildren live about 2000 miles away. I am also a Vietnam veteran (US brownwater navy) and proud to have served my country.

In the mid 1990’s my youngest daughter noticed I sometimes had a tremor. I blamed on over work and always being tired. And having abused my body when I was younger cowboying, rodeoing and just being young and stupid.

In 2004 I went for a consultation with a neurologist to get a second opinion about a possible back surgery. My bride was with me. The neurologist was performing a nerve induction test on me when I literally jumped 6 inches laterally straight up. My left arm and hand started scratching behind my ear. My bride started laughing and the neurologist asked her if she thought it was funny. She said “yes” and then he asked if she would like to see it again and she said “yes”. So he touched me with the probe and it happened again. Bride said I looked like a fat old dog scratching fleas.

After I got dressed the neurologist said I should definitely have the back surgery. Then I said “the surgeon wants me to ask you why I sometimes shake”. He ran me through the usual battery of touch your finger tips, tested my balance had me touch my nose and touch his finger tips and watched me walk. He said “I think you have Parkinson’s Disease.” And I said “What’s that?” He explained about the loss of dopamine in my brain and why I lost the dopamine. Then he gave me a sample of Sinemet told me to go home and come back in three days. So I went home and returned 3 days later and asked how I was. Told him I had not felt this good in years. That was my second time to hear of Parkinson Disease. That was October of 2004 and the same neurologist is still treating me today.

I was a buyer for a major building materials retailer in the southwest when I was diagnosed. Two years later I was given the option of being fired or leaving on disability. Not much option when you are 57 years old. So I took disability.

My neuro had been after me to go to a support group since my diagnosis. But I refused because the closest support group was 50 miles away. Now that I was retired he said I should go. I still refused. Literally on Jul 1, 2007 I woke up and told my bride I would just start my own blankety blank support group, find someone to run it, and just fade away. Well that was 10 years ago and my God had different plans for me. At our first support group meeting there were six attendees, including bride and myself. Today we are averaging 40 to 45 attendees per meeting. Since that support group started we have gone from one meeting a month to two meetings a month and started two other support groups and are getting ready to start two more. Every year we hold a 5K Walk/Run in April in conjunction with a PD Awareness Picnic. This year we had 189 participants in our walk/run and 178 attendees at our picnic. Also every October we sponsor a PD Awareness symposium. October 2016 we had 173 attendees at our symposium. Both our picnic and our symposium are free to pwp’s, their spouses and families and their caregivers.

I had DBS surgery on May 6, 2013 and without a doubt it is the best decision I have made regarding my healthcare. A CURE? No not by a longshot. But it did stop my constant tremors and eliminated my festination and freezing for almost 4 years. This year bride noticed my arm swing has gone, again. And my shuffling along with my freezing has returned, again. So we (my neuro and I ) are “playing” with my DBS using more and more complex settings. And there is good old Sinemet. I am back up to 3 tablets of 25/100 4 to 5 times a day. It could be worse. I was taking 2 tablets 25/100 every 1-1/2 hours before DBS.

What I have learned since I was diagnosed with PD. There is always, always someone worse off than me. And there is always, always, something to be grateful for. Sometimes it is just being able to breathe or wake up in the morning. But there is always something to be grateful for. And the last thing I have learned is the most wonderful, beautiful people in the world are those with PD. I thank my God every day for giving me the opportunity to work with and meet these beautiful people.