Sometimes, our lives transpire in such a way that it seems that the universe is trying to prepare us for future challenges.

Be this through success or failure, our adult existence is an honorary doctorate degree in how to survive and thrive despite life’s challenges.

To conquer these arduous tasks, we’ll need to have a solid foundation and forward momentum. By fulfilling these 2 requirements, we are ready to hit the "footpath." Going in unprepared means that "the trail" might swing back at us instead.

Back in the day, I spent a fair bit of time on a wilderness footpath. It's great way to see the sights, clear my head, take pictures, and get some exercise. This pursuit led me to great places and helped create memories. I wouldn’t be who I am without it. 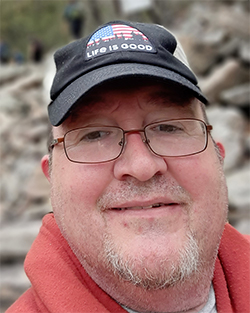 In 2013, I had this wild idea that I would spend a week hiking 70 miles on the Standing Stone Trail in Central Pennsylvania. About 4 months prior to this, I had returned to the woods religiously.

It’s not as if I wasn’t hiking before that; but over the previous year, it wasn’t a gung-ho passion like it was at other points of my life.

All or nothing mindset

All of the planets aligned, and I hit the trail hard. About a month and a half in, my wife and I went to a presentation by a guy who hiked the Eastern Continental Trail.

This is pretty much like doing the Appalachian Trail plus 1,000 more miles from Florida to Nova Scotia. You could call it the East Coast’s answer to the Pacific Crest Trail.

My scaled down version of this grand accomplishment was a noble idea, but it was too much, too soon. If I wanted a physical victory, I should have reduced it to an overnight trip. Instead, I read success as an all or nothing accomplishment of all-encompassing proportions.

Seeing it as a failure

I think many people mistakenly go all out like this. We newly athletic types base our lives on hardcore athletes. They make it sound good; then it kicks our butts.

On the Appalachian Trail, there are people who feel they need to cover every inch of the footpath or they haven’t completed the trail. They can see all of the same major milestones no matter how they do it, but anything less than everything equals failure.

Granted, I respect the accomplishment, but now I’d rather see the flowers, vistas, waterfalls, and bears.

With Parkinson’s, one of our first challenges on this "trail" is that whole "I may have Parkinson’s, but it doesn’t have me" mindset. Does this mean we’re a failure if we have a down day or our symptoms get worse?

It’s easy to feel "successful" if we can do something we want to do or have always done. The opposite is harder to accept. The key to our new lives is adapting to see the partial as a whole. Here is a place where every push back is a victory.

My long hike was too challenging on so many fronts. Still, those views of Central Pennsylvania’s mountains allow for some wiggle room in justifying complex and naïve decisions.

But today, on a day when I’m looking to get back in shape and not fall and go boom, those memories feel so far away. There is a feeling that I must do them soon or ... I’d rather not think about that.

The feeling of walking that trail with a huge backpack, in those pre-diagnosis times, is how Parkinson’s fatigue now feels. Achy shoulders push down, and I want to sit with my back against a tree and nap like Rip Van Winkle.

Maybe making the switch from rasagaline and amantadine to levodopa/carbidopa can boost my game like Clif Shots gel once did. If only it was about finding short bursts of energy.

I didn’t complete the hike. Over 2 full days, I did about 20 exhausting, sweaty, mountainous miles up and down over rocky terrain. It was a rough trek.

My wife came to the rescue

At the point the map and trail maker said that I was at Monument Rock, I couldn’t find it. It turns out it was about 50 feet through the brush on my left. I was so tired, I missed it through the foliage.

Physically, that journey was the most intense thing I ever did. On day 2, my boots placed the final nail in my coffin. I had painful blisters on both feet.

Cellphone reception was spotty at best, but I called my wife to rescue me. She found me on an unmarked dirt road over 2 hours from home.

My sweaty and exhausted self could have cried out of joy when she appeared that day. Who knew the cavalry drove a red convertible Mini?

When I got back to safety, I swore I would pay any price for good boots. As soon as I was in walking shape, I went to a local hiking store and asked for recommendations. They gave me a couple to try. I was happy with the second pair.

I’m on my fourth pair of these boots now. They work. My boots are the one piece of footwear I can wear for any distance without my dystonia killing me. Dystonia is awful. Mine now affects my toes, ankles, and soles.

I haven’t had problems with my boots at all, nor have I ever had issues with my trekking poles, which I also bought that night to replace a hiking stick I was using.

I had picked it up from someone who abandoned it on the trail. Hikers told me that using them was like going in 4-wheel drive. No truer words ever spoken. Almost 8 years later, I still use them to stay upright on the trail.

Soon, I’ll be using them for Parkinson’s as well. I am and am not looking forward to that. Not even Gandalf’s staff would make that balance transition easier.

As the physical support vanishes, Parkinson’s leaves me with more need for mental support. This is definitely there, and I can ask for more. It just sucks to know my losses bum other people out.

The recognition of my frailty in the eyes of others is the only thing worse than bumming myself out on Parkinson’s losses. There’s no spot on the trail to cheer me up from this.

The Fear of Forced Change