Way, way, waaaaay, back in the summer of 2007, my four children came up with the most amazing idea! Their daddy's birthday was coming up soon. As four kids between the ages of two and seventeen at the time, they knew exactly what their dad wanted for his birthday! Was it a new golf club or cool tool box? Could it be some fine cigars or an expensive bottle of port? Maybe something like a great best selling book, fancy new tie, or gift card to his favorite restaurant? Of course not! Dad needed, more than anything in the world...

Of course, such a surprise had to be arranged with the utmost secrecy! (More for the fear of the gesture being completely rejected!) Following a number of random trips to visit a new litter of adorable chocolate labs, the kids finally selected the perfect puppy for their father. Meet the newest member of the Hott Family: HERSHEY! 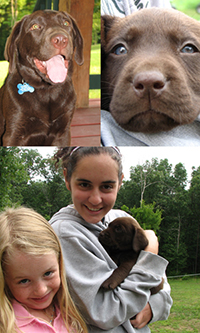 Isn't he adorable? I will never forget the first day we brought him home! Mostly because Dan was furious with me; but, also because it only took one lick across Dan's nose for Hershey to be utterly and completely devoted...to Dan.

Watching an eight week old pup wobble between the legs of our older family pet, a German Short Haired Pointer named Freckles, Dan's heart melted immediately. Of course, it could have also been watching his four kids giggle and glee in delight as the newest member of the family quickly became the center of attention.

Hershey quickly grew and made his way on Hott Mountain; he will always be known as the best "Stick-Catching-Bring-It-Back-Dog" to ever exist! Violet could toss a stick a million times and the crazy dog would ask for one more. She would even launch a stick off the bridge, Hershey would jump through the air, disappear under water, and emerge with the exact stick she threw. Also, he will forever be remembered as our "What-the-H***-Is-Hershey-Barking-At-NOW!" dog that found it his duty to alarm the household of all things creeping in the woods at all hours of the night!

To a Parkie pet

Even though Hershey behaved probably like any other Chocolate Lab on the planet, there was one thing surprisingly unusual about him. You see, unlike the several other family pets that have blessed the Hott Family, Hershey arrived just a year prior to the appearance of another permanent fixture in our growing family, Parkinson's disease. And, in a way, I believe Hershey saw Dan's Parkinson's symptoms long before we knew what was going on.

Always sensitive to Dan's needs, Hershey is never far from Dan's side. And, always the mouthy pup, he persistently lets Dan know what his surroundings include. From growling at the hidden Copper Head waiting to strike my ankle, to alarming Dan of impending dangers, Hershey's mission is always to keep his people safe - including the day the logging company arrived.

With 26 acres of mature trees to harvest, along came heavy equipment and workers to chop, cut, and load several loads of lumber. This activity brought Hershey to his required mission to keep Dan safe. As Dan decided to walk through the woods just to chat with the foreman, Hershey had a completely separate notion. There was no way in hell he was allowing Dan to walk through a mess of fallen trees, random limbs, and freshly stumped stumps. What was Dan thinking? A fellow with Parkinson's disease whose primary symptoms are stiffness and rigidity topped with a dragging left leg should NOT be out walking in the woods.

So, guess what? Dan obeyed. Hershey gently nudged him along, all the way back to the house, back to safety. Hershey has always been, and always will be, our beloved "Parkie Pup" or, a Parkinson's Patients Best Friend. Just look at him now! Dan and Hershey...BFFs!

Do you have a Parkie pet too?

Tell me all about him/her! Our adorable furry friends are a source of comfort, affection, and love, aren't they? And, if you happen to have a Hershey, they are also on safety patrol too!

Community Views: What Are Some of the Hardest Parkinson’s Symptoms to Manage?

28 comments
This article represents the opinions, thoughts, and experiences of the author; none of this content has been paid for by any advertiser. The ParkinsonsDisease.net team does not recommend or endorse any products or treatments discussed herein. Learn more about how we maintain editorial integrity here.