Deep brain stimulation (DBS) is a surgical procedure in which a device is implanted in the patient to deliver electrical pulses to the brain to decrease motor symptoms of Parkinson’s disease (PD). Generally, DBS improves symptoms that had previously responded to medication, like levodopa therapy.1,2

The electrical pulses are targeted to the areas of the brain that control movement to block abnormal signals that produce symptoms like tremor, slowness of movement, and rigidity. Areas of the brain that may be targeted include the subthalamic nucleus and the globus pallidus. The exact placement of the stimulation is based on the individual person’s needs.2

Who benefits from deep brain stimulation

DBS may be considered for people who have had Parkinson’s for four years or more and who have significant “off” periods, times when their medication isn’t working well, or those who have dyskinesias (uncontrolled, abnormal movements). Dyskinesias are frequently a side effect of long-term levodopa therapy. DBS can help relieve motor symptoms of stiffness or rigidity, slowness (bradykinesia), and tremor. It does not work well to treat balance impairments, freezing when walking, or non-motor symptoms of PD. Because DBS can worsen cognition or memory problems, it is not recommended for people with dementia.3

Both a neurologist and a neurosurgeon evaluate people with PD who may be candidates for DBS. Evaluation includes reviewing medications and symptoms. Brain scans, using MRI (magnetic resonance imaging) or CT (computed tomography) scans, are performed, and a memory and thinking test may be used to evaluate cognitive function.3

There are three components to DBS: the lead, the extension, and the neurostimulator. 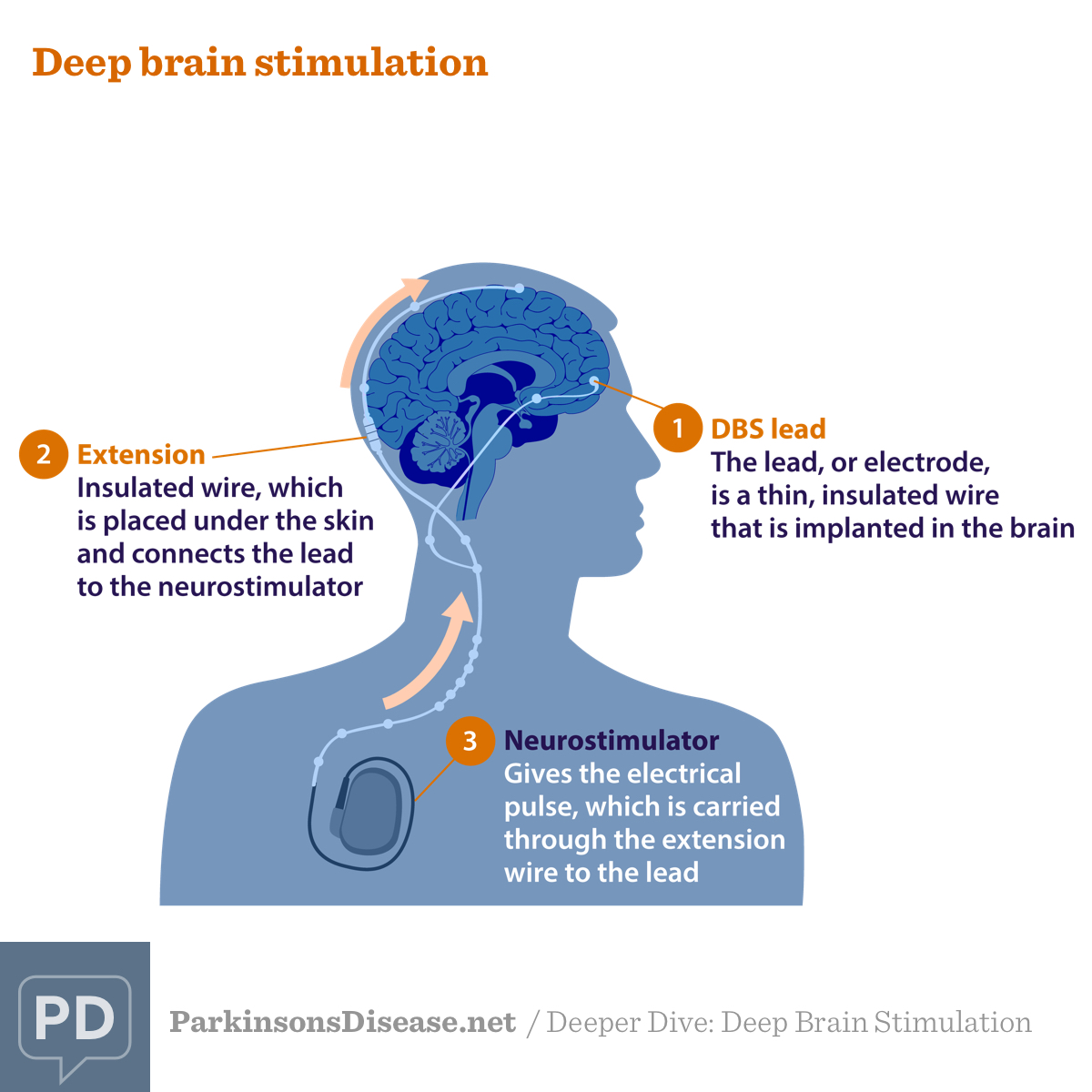 The procedure of deep brain stimulation

During surgery, the electrodes are placed into the brain. The patient may remain awake, or the patient may be asleep (under general anesthesia). The battery-operated neurostimulator and the extension wires are also placed into the patient’s body. A couple weeks after the surgical procedure, the neurostimulator’s settings are fine-tuned using a handheld programmer. The settings may be adjusted over time to determine the best combination of electrical stimulation and medication for the individual person.2,3

The benefits of deep brain stimulation

Many people who receive DBS are able to reduce their medication, although most still need to take some medication after the procedure. Many patients experience a significant reduction in their motor symptoms, and the reduction of medication lessens the side effects experienced with those medications.2,3

The risks of deep brain stimulation

There are potential risks with DBS, including the risk of bleeding, stroke, and infection, as well as other complications associated with anesthesia. People considering DBS should discuss the risks and benefits of the procedure with their surgeon.2,3