Me and Mr. Parkie 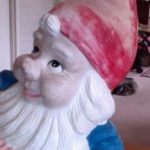 I was diagnosed with PD in May of 2008 nearly 10 years ago. On reflection I had been struggling with PD for a number of years before diagnosis! I guess my first response to the revelation was one of shock and horror. As a way of coping, PD became Mr. Parkie. This was written August 2008.

When I was diagnosed with Parkinson’s disease my father wrote me a letter. This surprised me, as he had not written to me since I was a young girl at boarding school. The letter was beautifully crafted, describing a metaphoric journey and that the Parkinson disease would be my traveling companion. He advised I should not fight the disease but let it reveal the road that I must travel, as by so doing, I would have rich and fulfilling experiences.

I have endeavored to take his advice. At times I am comfortable with my traveling companion Mr. Parkie, and let him sit on my shoulder. On other occasions I have become angry, for he takes liberties with my body and mind, usually when it is least expected. On these occasions I want to scream abuse at his thoughtless behavior, but this is pointless: he is an arrogant and selfish companion who only cares for his comfort and wellbeing. There have been times that he occupies my very being, making it impossible for me to function. The frustration that this creates reduces me to tears of self-pity and the overwhelming desire to evict him from his tenancy. All the ranting of obscenities is pointless, as Mr. Parkie has a lifetime lease on me. It is as I arrive at this realization that my father’s words resound in my head, I relinquish control, and Mr. Parkie reveals the road ahead. This road is unfamiliar and confusing, as the disease is slow and pernicious.

I am not a trusting traveling companion and I require a more comprehensive map than Mr. Parkie is prepared to reveal. My sense of panic generated by realization that time for me is limited, is brought into sharp focus when the despotic Mr. Parkie flexes his muscles as a warning that he is with me for the duration of my life.

I barter with the despot, who reluctantly agrees to some of my suggestions with a lack of graciousness, as he reminds me that he is always in control. Acknowledging the presence of Mr. Parkie has been, a battle of wit and deception, as I did not want him to gain any kudos from my endeavors.

I did consider extending an invitation to co-narrate this discourse, with the expectation this may satisfy Mr. Parkie’s need for control. Through experience I have come to the conclusion, by allowing Mr. Parkie to share the discourse, he would view the invitation as a license to dominate the narrative. I cannot stop him from interfering, but I can manage to argue the points of difference, which gives me a voice!