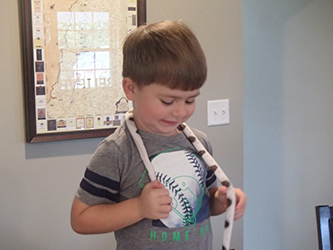 If you look at one near-constant in the photographs of our past, it is that the people in them are smiling. Kids learn how to "cheese out" for the camera early on. My nephew is a perfect example. He has been ever since he learned how to do the "monkey." I guess it's part of the DNA since my sister always had a smile for the camera. 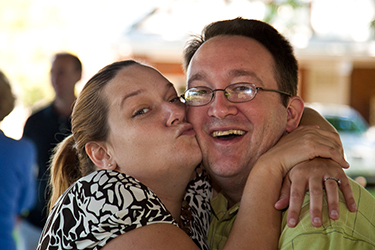 I could do some goofy smiles, too. In my favorite picture with my wife, I have the biggest smile I've ever worn. That was 10 years ago, but I still feel that way when we're out experiencing life.

And that's how it should be for all of us. Think about it; I'm sure you have your cherished nostalgic times. As we age and go back through these photographic memories of life, we tend to find lots of images that capture the spirit of the moment. What were your favorites? I've got a lot. Oh, do I have a lot.

My whole office is surrounded by images of places I've been and people I've been through life with. Looking at them now, everyone has a smile for the camera. There's something about being able to share these special moments, people, and places. It makes us seem human and genuine. "Someone loves me. I graduated. These are my kids. I was here. I joke around." 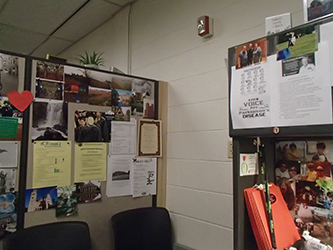 Wearing the smile accentuates this. It creates a conversation out of thin air. As I said, it makes me more real than just "the guy telling me what classes I need to take, but I still don't understand why."

And yes, I want you to think of me as professional, real, and talented, someone with a story beyond just "worker bee," but I need an in. Beautiful nature pictures can do that, but a smiling occasion does more. That said, I do love photography, and I want you to like my photography, too! However, I want you to know I want to make a difference in your life. I can't do that without an "in".

My collection of photos

With my trusty camera, I have captured the last 30 years of my life. Because of this, I have quite a collection of photos. What's more, I have preserved photos of my family back to 1906. Sure, the black and colors are faded, but so are the pictures, which were taken on my Kodak 110 camera in 1991! 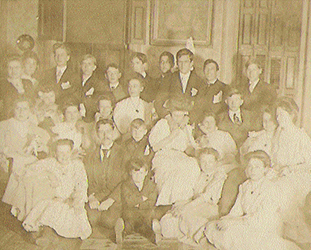 For those only in the cellphone camera world, 110s were the non-disposable disposables. When it comes to film, 35mm was the real deal! In fact, I still have both of my 35mm cameras.

It's not like I'll ever use them again, but they were expensive at a time before digital was all the rage. They're not going anywhere. Now, in my time pointing and clicking, I take a lot of pictures of smiles (and never once will I "duck-lip" for the camera!). Those old smiles still make me happy, as I'm sure mine do for other people.

But then in steps Parkinson's, and yeah...

After Parkinson's, a lot of things slow down. It's called bradykinesia. This leads to hypomimia, or Parkinson's mask. This equals a straight facial expression, as best described by Peter, who is a cartoonist on ParkinsonsDisease.net.

Of course, there's that voice loss stuff with our mouths, too, not to forget what I read somewhere about losing the "joy" in our voice. But the smile...we can't lose that, can we?

Recently I was at a pizza-making party with friends. I did that thing where I give a small grin, as opposed to being smiley, ear to ear. Well, this expression was what I got, and I was having a lot of fun (as opposed to rushing for the door)! 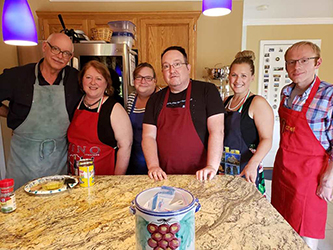 Some people think this makes me look "even keel" or "mellow" or unhappy. Yes, I've been asked why I don't smile. I give the typical answer that I have Parkinson's, and I get apologies, but to me, they aren't necessary. These people didn't mean to do damage. They seem to want to know what's wrong and how could they help, however big or small. So I'm OK with them and me.

Nevertheless, between the jacked-up action figure, claw hands, and my odd walk, I'm not completely sold on the new identity. It's not one of those 24/7 worry things, and I know that people are accepting once they know, but I'm not consistently buying.

So all in all, while it's been said that if people know me, they can see my alternative expressions of joy. However, it still means I have to let them know first. This is just a lowdown thing for a condition to do to someone. I'm just saying.

My Many Moods with Parkinson's

26 comments
This article represents the opinions, thoughts, and experiences of the author; none of this content has been paid for by any advertiser. The ParkinsonsDisease.net team does not recommend or endorse any products or treatments discussed herein. Learn more about how we maintain editorial integrity here.

Please read our rules before commenting.

Have you taken our In America Survey yet?