Discovering My Parkinson’s: Four Words I Hope Never to Forget 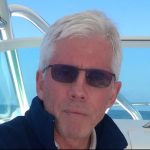 I knew without research, what this gradual change in small motor dexterity, meant. A neurological disease had taken another brain, mine. and here I’d planned so well for an idyllic retirement. As Mick Jagger says, “you can’t always get what you want, but if you try real hard, you just might find, you get what you need.”

It’s been about eleven years since I first noticed that I was dropping more and more notes during my jazz solos. I instinctively knew what the cause was but I didn’t really want to think about it. Friday nights playing jazz, or rock and roll, was my reward for all the years I had worked toward my dream of retiring early and not having to worry about getting paid to play sweet music. When I was still a teenager of sixteen, I dreamed of being next Eric Clapton or Jimmy Page, but I very quickly realized that there were thousands of aspiring guitar players out there, my equal or better, and that my chances of becoming a rock star was slim to none. Good on me for realizing this quickly. Fame is something I could live without. I would concentrate on business and making my fortune.

So, here it was about 40 years later, just as I’d planned it, playing music for zero pay, with my little duet plus one in a Mission Viejo, California Italian restaurant run by a Vietnamese gentleman who clearly did not know how to run a restaurant. He was weeks away from bankruptcy and soon, my little group would be looking for a new gig where we could play, once again, for no money.

My little group consisted of me the mostly retired entrepreneur / CEO on jazz guitar, Gary, a bass and keyboards musician I found on Craigslist.com. He was also and accomplished attorney and major airline captain too. Talk about ambitious. Our female vocalist came to listen one night and talked us into letting her sing. It was an easy decision because she drew fairly large Friday night crowds, mostly made up of women who were clients (or patients) of the new age healing center down the road in St. Clemente where our singer lived and worked.

Time to see a neurologist

So, I am flush, and retired young, and living the dream in southern California, and I am dropping notes. My neighbor is a good friend and a doctor so I asked him about what I suspected, but he was not a neurologist and avoided giving me his diagnosis. He did point me to a local neurologist who did some testing. He banged on my knees with a rubber mallet testing reflexes, flexed my arms and legs to listen for ‘ratcheting’ through his stethoscope, and finally he had me do some finger pinching exercises, testing small motor dexterity. Then he left the room, but just before he shut the door behind himself, he peeked back and said “remember these four words and I will be right back.” He told me the four words, shut the door, and I left me to my own devices.

Determined to pass this part of my examination I started repeating the four words over and over, in an attempt to burn them indelibly into my brain. Then I tried making some word-to-object associations, a trick I’d never mastered previously. I don’t know why I thought it would work now when I needed it most. I waited, and repeated, and then the doctor came back in. He sat down and we had a little chat. I was multitasking like crazy, repeating words while carrying on a conversation.

Well, our little chat lasted about 5 minutes, then he asked me to recall the four words. Proudly I repeated them back without a hitch. “Great job”, said the neurologist, then he instructed me to go down the hall and see the technician who operated the CAT scan machine. This is where they attach electrodes all over your head so they can watch the brain’s electrical patterns. I laid on the table, but not before making some silly joke about the technician’s equipment like, “how many scans of cats have you done on that thing.” I could tell this was not new to the technician, but he humored me and smiled. Moments later he reprimanded me for meditating. “No meditating,” he said. “We want to see what your brain is doing at rest, but consciously at rest, not while meditating.”

Those four words are indelibly etched in my mind

After 20 minutes of restful brain scanning, I was unplugged and released back to the examination room I had come from where the neurologist was waiting for me. Once again, he asked me to recall the four words, and I was proud to oblige. I would repeat these four words to the neurologist, unsolicited, at the start of every one of at least 30 visits to his office over a seven year period since he told me it was Parkinson’s Disease. I remember the four words even today, eleven years later. They were banana, road, elephant and blue. My early retirement was not going to be as planned.