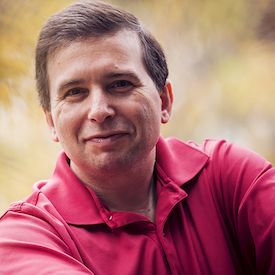 Karl Robb has lived with Parkinson’s disease (PD) for over thirty years. Karl noticed a distinct change when he was seventeen years old and was diagnosed with young onset Parkinson’s disease at the age of twenty-three. Now fifty, he has been a Parkinson advocate, entrepreneur, inventor, writer, photographer, Reiki Master, and speaker on PD issues. In 2008, Karl started his blog, A Soft Voice in a Noisy World. He writes about health, hope, and new perspectives on living well with Parkinson’s. Karl is the author of two books, A Soft Voice in a Noisy World: A Guide to Dealing and Healing with Parkinson’s Disease and Dealing and Healing with Parkinson’s Disease and Other Health Conditions: A Workbook for Body, Mind & Spirit. He was a blogger partner for the 4th World Parkinson Congress.

He has helped organize several young-onset conferences and has been an advocate for Parkinson’s disease issues for over twenty-five years. Karl, with his wife, Angela, received the 2008 Murray Charters Award for outstanding advocacy from the Parkinson Action Network (PAN). He spent six years as a PAN board member and is currently a board member of the Parkinson Voice Project (PVP).

Click here to read all of Karl’s articles on ParkinsonsDisease.net.