Humor and Parkinson’s: An Ironic Universe

In our Parkinson’s lives, a lot of things aren’t funny. We encounter memory loss, lack of independence, tremors, Parkinson’s mask, and a bevy of other issues. We’re told to stay positive and keep a sense of humor, but that’s not always easy when our dopamine levels are fluctuating and we’re experiencing over-stimulation of senses. However, it is a necessity. Most times we can find humor in watching funny movies. I recommend The Hangover, Walk Hard: The Dewey Cox Story, The Wedding Ringer, Elf, and Girls’ Trip. These are some of the funniest movies I’ve seen recently. Yes, I prefer stupid funny, but not too stupid. There is a fine line. Nevertheless, whether your prefer your comedy old school funny or more family friendly, the point is to live big and laugh often. Sometimes, this means laughing at yourself.

At the center of my PD issues is my sensitivity to certain sounds. Already, I have refrained from using headphones and listening to as much thrash metal as I once did, but now, I also find that I have to move away from particular noises. These, for example, include ice moving around in a glass and the crinkling of potato chip bags. High-pitched beeps are an annoyance for me, too. Additionally, with my Parkinson’s hearing issues, I find it hard to hear some softly-spoken female voices. Yes, the same force that makes us lose our ability to blink (or blink uncontrollably), smell, and taste (same reasons as smell – hyposmia) can also affect our hearing.

Case in point, a few Fridays ago, my wife and I were cuddled up on the couch watching movies. She was giving me a “brain massage,” which is a nice way of saying that she was petting my head like a dog. Just like a dog, I found it felt good. However, there was one problem. When my ear was touched, I would go into that being set off state.

“You can’t do that. It just negatively affects me too much.”

Well anyway, that was the end of that brain massage.

The fun things in life 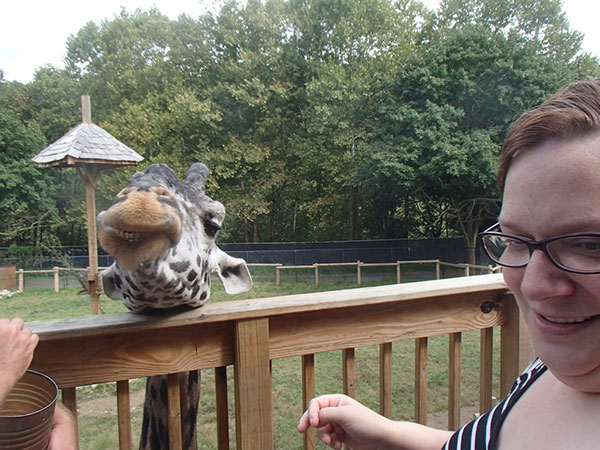 My wife and I try to do what we can to make memories while we still can. It’s the race against the PD clock things, so the day after that incident, we went to the Lehigh Valley Zoo (near Allentown, Pennsylvania – it’s not just a Billy Joel song).  At $13 for an adult and $11 for a kid to get in (Tiffany Haddish is letting you know they also do Groupons, which is a good thing for all of us who are living on a budget), it’s really a bargain. They have penguins, otters, lorikeets, camels, giraffes, and a lot of other animals, though they have no bears. I’m a fan of the Pennsylvania black bear, so to not see my buddies is a little disheartening, but yeah.

While there, we stocked up on park coins while we were there since we wanted to feed animals. Most of the feedings were $2, though the giraffe was $4, and we couldn’t but it with coins. What’s more, he ate the salad in no time! I wanted more salad leaves to feed him!

The goats were much the same. If my wife would have let them, they would have eaten all of the food in one swoop. Thus, the key was to ration or take out a second mortgage.

However, the highlight of our trip was the bird sanctuary where the lorikeets lived. 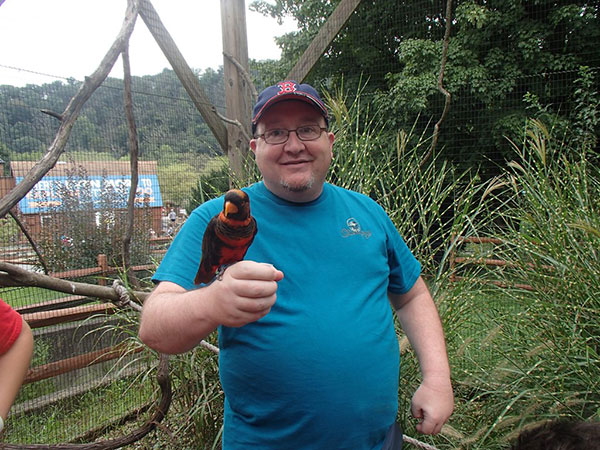 Yes, it’s called a lorikeet, which is a small to medium-sized arboreal parrot, which finds that eating nectar is the best thing in life, so we went to the show. We lined up to get in the double-door enclosure. Then, the college student in charge gave us the ground rules. 1) Don’t touch 2) watch where you step 3) don’t leave until we leave as a group, and 4) don’t touch. Our guide spelled this out for us in such a way that showed we weren’t going to mess around, but also, that she was going to give us the best possible experience. She did a great job.

When we arrived, the volunteers told us to leave the small dental cup open at the top, and to let the birds land. In no time at all, one made its way to my arm and wandered down to take a drink. Instantly, the thirsty lorikeet siphoned off all of the nectar in a quick burst. However, the bird was still hungry, so it needed somewhere to go.

The divine sense of irony

I couldn’t remove the bird from my ear. Instead, I had to let it peck and suck at whatever ear wax it thought was in there. I was trying not to laugh at the humor of this, but I was scrunching up and making faces instead. Another worker tried to talk the bird down, but alas, lorikeets don’t speak English, so my bird buddy nibbled away.

As he did, they asked me if I was OK. All I could say was, “Yes, I’ll put up with it because it’s a once in a lifetime experience.”

All the while, my forearms went rigid, and I grimaced.

My wife laughed as did the other people in the exhibit. She gets the universe’s sense of humor is all about irony. I do, too, which is why I can laugh about it! Apparently, bird landings happen a lot.