Parkinson’s from the View of a Medical Educator: An Introduction 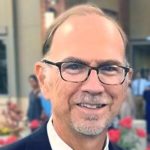 On the morning of March 11, 2014, I received my Parkinson’s diagnosis.  The good news that morning was my diagnosis explained all of the health issues I had from the previous three years.  A partial list of maladies included stiffness in right hand and neck, swallowing defect, loss of strength/tone of my voice, and a slight right arm tremor. The bad news was that I became one of ~60,000 new cases of Parkinson’s that are diagnosed each year in the United States.  This adds to the more than one million people who currently are living here with Parkinson’s.

Since the day of my diagnosis, I’ve met some fantastic, remarkable people, people with Parkinson’s, their care partners (“Coaches”), Physical Therapists, Occupational Therapists, Speech-Language Pathologists, Movement Disorder Specialists, Neurologists, Social Workers, Personal Trainers, and just other people wanting to help.  We are all united by Parkinson’s, how it uniquely affects each person and their extended family, friends, colleagues, and the variety of professionals we use to help manage the disorder.  Notice I do not like to use Parkinson’s and disease together; not only is it somewhat redundant (at least to me the name Parkinson’s itself describes a disease) but it offers me some solace and control to be able to simply say, “Yes, I have Parkinson’s.”

Linking my life to Parkinson’s

I am a scientist [biological chemist that for three decades studied hematology (biology and diseases of the blood and blood-forming organs)].  Additionally, I am a medical educator (have taught hematology and immunology to medical students and health-career-focused undergraduates for many years).  I am also a patient and want to live my life as best I can while under the influence of Parkinson’s (in our Neurology block I’ve been ‘presented on stage’ to 165 medical students several times).  I try to be an advocate and voice of reason in helping others manage and deal with their own Parkinson’s.  Finally, I have been told that I am a translator of science. I will try my best to describe the complexity of the science and medicine of Parkinson’s into words all can better understand. It is indeed an honor to join everyone else at ParkinsonsDisease.net and help contribute to the wellness and knowledge of this growing community.

Be hopeful and stay positive

Reflecting on a different disease Steve Gleason said: “Life is difficult. Not just for me or other ALS patients. Life is difficult for everyone. Finding ways to make life meaningful and purposeful and rewarding, doing the activities that you love and spending time with the people that you love – I think that’s the meaning of this human experience.”  We are a community united by Parkinson’s. Staying hopeful and being positive allows one to challenge the ever-present Parkinson’s.