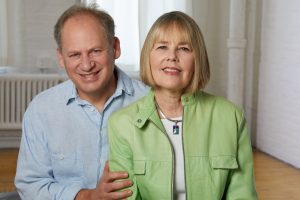 Marc Jaffe has been acting funny for over 30 years. And writing funny. After getting his MBA from the University of Michigan he pursued the typical business career of stand-up comedy. Within a few years of moving to LA, he was headlining comedy clubs, working cruise ships and appearing on numerous stand-up TV shows. He had married, settled back in Cleveland and continued his stand-up career when he was offered a job writing for an obscure TV show called Seinfeld. In 2008 his wife Karen was diagnosed with Parkinson’s disease. Marc and Karen used her diagnosis as fuel to be creative and raise funds for a cure. Marc wrote a play called Side Effects May Include… which will be running off-Broadway at the SoHo Playhouse in New York City from January 15-27, 2019.

How long after your wife’s diagnosis did you come up with the idea for Side Effects May Include?

It’s not like I came up with an idea, it just started happening, from the diagnosis to the keeping it a secret, to the “hypersexuality” side effect of [the prescription medication she was taking] to my initial happiness and then overwhelming stress. There was no “aha” moment, just kind of putting together the funny things as we went along and taking a 30,000-foot view of my life and realizing it was pretty bizarre. That combined with my experience of writing comedy that was often introspective enabled me to process it as some kind of performance (see question 3). It all came together about 3 years after diagnosis.

What’s the message you are trying to convey and how has this helped you both in dealing with PD?

The message is dependent on the viewer. Whether someone has PD or not or is a caregiver or doesn’t even know what Parkinson’s is, they will all take away different things. I think a message for all is the danger of keeping secrets, but for people closer to this disease, I think the messages are that a) it’s OK and even good to laugh at what we’re going through and b) we’re not alone. I thinks it’s very powerful to see at least a part of your story told especially when you have a disease that often makes people hide in some way.

What made you choose a play?

I wanted to get some of the funny things that were happening out in public. Because we were keeping it a secret, however, I couldn’t go on stage and talk about it as I was used to. I asked Nick Koesters, an actor friend to go up and tell jokes for me, but he was unwilling to do stand-up. He said he would do it if I wrote a play. So I did.

How was your wife involved in the writing of this play?

Aside from being my muse, she reviewed it and gave me some parameters of things I could cover and things I couldn’t and then encouraged me to add some fictionalized scenes so we could at least have some question as to what was truly personal and what is just a story. That allowed her to be comfortable with everything in the show.

What’s the most challenging aspect of Parkinson’s in your lives?

That there are no vacations from Parkinson’s. We have been able to deal with the challenges of it as time goes on, and the ups and downs become expected and part of the rhythm each day. But you never get to say, “I’m taking a week off from PD.” There should be disease hiatuses. Maybe in my next play.

After this play, what are your plans to continue advocating for Parkinson’s disease?

Karen and I are very involved in many ways. We started a foundation called Shaking With Laughter (She’s shaking, I’m laughter) in 2011 and last year we passed the $1 million mark in funds raised for PD research. We are on the board of the Cleveland Brain Health Initiative, an amazing consortium that we expect will do leading-edge research. Karen continues to be on the Michael J. Fox Foundation patient advisory council and finally, she is a founder and current Vice-President of InMotion, a PD wellness center here in Cleveland that is unique in the country in that the doors are open for free to any PD patient and their care partner. We also speak at Parkinson’s related gatherings around the country. Things never seem to slow down.

For more information about Shaking With Laughter and Marc’s play, Side Effects May Include…, which is running from January 15 – 27, 2019 at the SoHo Playhouse in New York, visit: http://shakingwithlaughter.org/