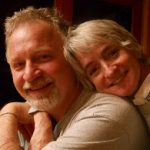 The strangest thing happened.  Again.  What is a Parkinson’s Disease care partner to do when an unwanted visitor returns night after night and hides in the dark shadows of her bedroom quietly waiting to attack the love of her life in his sleep?  When instead of friendly neighbors and family, your house guest becomes none other than a lurking Freddy Krueger, first stirring you awake with his dystonia, mumbles eventually erupting into violent curses, until finally you fall victim to a deadly attack like just another Nightmare on Parkinson’s Street! So, again I ask: What does this care partner do?  Well,… after waking up (again), perching on the precipice of our large king size bed (again), I roll over facing my PD “Freddy” hubby, and do the only thing that is safe and prevents me from being captured in his conflict.

And it works! Much like a two-year-old making a racket in church, a simple “Shush!” and instantly the physical struggle stops, his cursing transforms into a quiet sigh, and gently he falls back to sleep. How crazy is that?!?  “SHUSH!”

In the dark of the night

Initially, I felt pretty alone in the night.  Awake again after another one of Freddy’s visits to our house on Hott Mountain.  Frankly, it also feels pretty lonely the next day too.  Trying to cope with work and kids after you drudge your way through the day with interrupted nights of, well,… nightmares.  Harder still for your care partner as he struggles with less than an effective regime of medications which seem to barely help when he can not rest.  Not the safest formula for a fella with Parkinson’s Disease.

The last month has been especially difficult, and frustrating.  (Frankly, it pisses me off.)  You see, the Veteran’s Administration screwed up his meds at his last visit which delayed the delivery of the very drug therapy which helps him sleep:  clonazepam.  His doctor prescribes this to help with the sleep problems related to Parkinson’s Disease.  Without his nightly dose, the nightmares regularly returned, until the prescription finally arrived.

And just like the “SHUSH” dispelling another crazy dream, when the clonazepam returned, the nightmares stopped.

Honestly, I haven’t a clue why a simple “shush” worked to bring my husband back to a peaceful bedroom.  I was merely searching for a physical free interruption.  Maybe raising four babies, I just had plenty of practice “shushing” tiny humans. Funny a “shush” works on my big human too.
Care Partners, let’s unite!  Maybe a “shush” will work for your big human too!